THOUSANDS of race packs are being sent out to Admiral Swansea Bay 10k runners later this week. 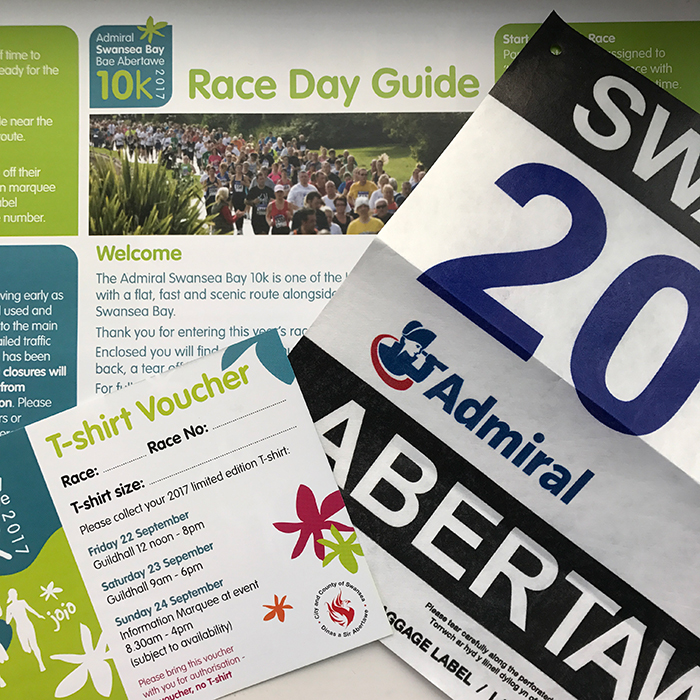 The race packs include a race day guide, race numbers with electronic time-recording chips on the back and details on how to collect the 2017 tech t-shirt.

Swansea Council is behind the Admiral Swansea Bay 10k, which is taking place this year on Sunday September 24.

About 4,500 people are expected to take part this year, with the August 31 deadline to enter now fast-approaching.

Cllr Robert Francis-Davies, Swansea Council’s Cabinet Member for Culture, Tourism and Major Projects, said: “The Swansea Bay 10k, being sponsored by Admiral for the eleventh year in succession, is a celebration of Swansea’s sporting and running culture that will be shared with the rest of the UK and beyond if we win the UK City of Culture 2021 title.

“The distribution of thousands of race packs shows the 2018 event is edging ever closer, but there’s still time to enter.  This is why I’d urge anyone who wants to take part to get their forms in by August 31 to avoid disappointment – there are only approximately 500 spaces left.

“The Admiral Swansea Bay 10k, set against the world class backdrop of Swansea Bay, is a fantastic event for elite athletes, experienced runners and people looking to raise money for charity or tackle personal fitness challenges.

“With a huge crowd sure to line the route once again, the event has a fantastic community feel that helps to inspire everyone who takes part. Earlier this year, the event was named the UK’s second best 10k in The 2017 Running Awards, with the junior races being named the UK’s best child friendly event. This is testament to the Admiral Swansea Bay 10k’s organisation and quality.”

A mascot race is also taking place on the day of this year’s 10k, so entries are invited from groups, organisations and companies looking to win the £100 on offer for the winning mascot.